For Hamilton, gun violence has been stable over the last few years, but the city is already experiencing a spike in gun-related violence this year which isn’t surprising. Over the years, Hamilton has experienced a high number of firearm incidents which you could find in Hamilton news.

According to Hamilton’s Discharge of Firearms By-law, you aren’t allowed to discharge a firearm,

In addition, you have to  ensure that projectile(s) discharged from the firearm won’t leave the property from where they were discharged, and no one is allowed to obstruct a Law Enforcement Officer while he or she is carrying out duties under the By-Law.

There are a few exceptions to these bylaws though. For instance, if you hold the appropriate hunting and firearms licenses, run a federally regulated, and licensed rifle range, gun shop, firearms dealer or gun club that follows zoning and building requirements. In each case, the is aimed at ensuring a controlled use of guns which may help to prevent gun violence.  However, even under strict rules, gun violence isn’t completely eliminated.

Although the number of violent crime incidents in Hamilton for 2015 was a bit lower in comparison to 2014, 2015 had the highest rate for gun violence since 2009 (63 gun related incidents). In contrast to 2014, gun violence in 2015 was tripled with 33 incidents involving the gun usage.

Out of 45 gun violence incidents, 13 of them took place in September. Those were firearm discharge incidents, when a victim was shot or endangered by the discharge of a firearm.

For Hamilton, 2015 started with gun shots fired in a jewellry store robbery at Eastgate Square. The gunman in question had existing gun and robbery charges. In April, two men including a son of former Stoney Creek Councillor, Brad Clark, were shot on Queenston Road. 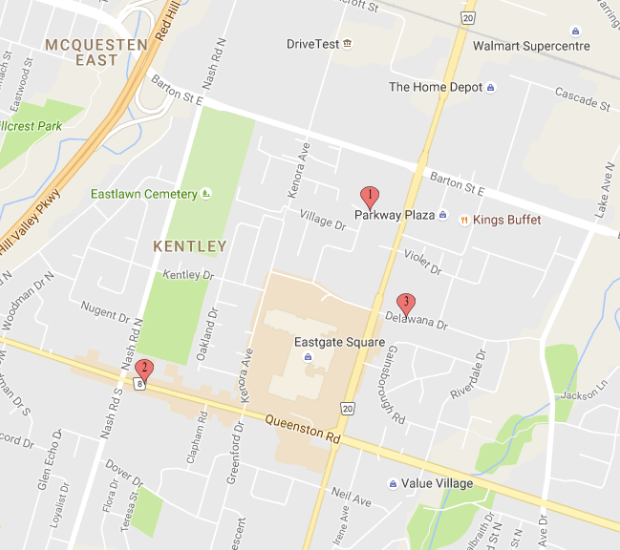 Later on in May, a shooting incident happened in the area of Delawana Drive. No one was injured and three young Hamilton men were charged with a possession of a weapon. The same month on the 17th other gunshots were heard in the area of King and Ashley streets. No one was injured but there was visible bullet damage. That same day, a second shooting occurred on Main Street near East Avenue.

Three gun violence incidents were reported in June. A 15-year old boy confronted policemen with a gun, on Wellington Street near Wilson Street. In mid-June, a targeted attack occurred when three victims were injured on MacNab Street. In the same area, another gun shooting happened the next month in July, but no suspects were caught.

August 2015 wasn’t any better, with a daytime shooting incident near Wentworth St. South Street and Rutherford Avenue. The third time in that same area, near MacNab Street North and Simcoe Street West, a gun fight escalated in one 18-year old male being murdered. One more gun violence incident occurred in September in central Hamilton, at Barton and Chapple Streets.

Due to the rising gun violence occurring in the city, the topic of gun bans have been in the spotlight in 2015, which has been of concern to rural residents in Hamilton. Farmers, hunters and trappers would be highly impacted by such a ban on guns, which has been negatively received as a viable solution. After public meetings with local councillors and city bylaw staff, the city’s rural and urban communities have been discussing other possible ways to deal with gun usage.

Proposed solutions include: redefining geographical boundaries where firearms discharge is allowed, further clarifying the definitions of a firearm, and reviewing the city’s firearm discharge bylaw.  We have yet to see what if the Discharge of Firearms By-law will be tightened in order to regulate and implement more responsible gun usage and, by extension, prevent gun violence. The current bylaw was last reviewed 11 years ago in 2005.