Like it or not, Canadian firearms incidents across Ontario is a common occurrence in urban cities like London. In the past, there has been a steady number of gun violence incidents in the city.

2011, in particular, had a high rate of gun violence. Since then, the number of guns seized have climbed in number each year. These guns have been seized from police raids and busts and guns that have been traced, or tracked down by police when they can’t determine where the gun came from.

To add to this, carding and street checks have been more commonly and widely used than it has been in Ottawa, Hamilton and Windsor. Overall, there were 8,400 street checks in 2014 alone, a practice that involves police stopping and randomly questioning people who aren’t under investigation.

London has cut back on them recently in anticipation of Ontario’s upcoming ban on street checks and carding that will happen in January 2017. Unsurprisingly, London police have said that the lack of carding is already hindering their fight against guns and gangs, ultimately leading to restricted interaction and hence, intervention with gun related incidents.

Because of this, London residents need to take extra precaution. The most notable Canadian firearms incidents and shootings have happened in certain areas around London.

To get a better idea of where these incidents are occurring in the city, below is a visualization of the most notable gun incidents across the city of London between 2011 and 2016. 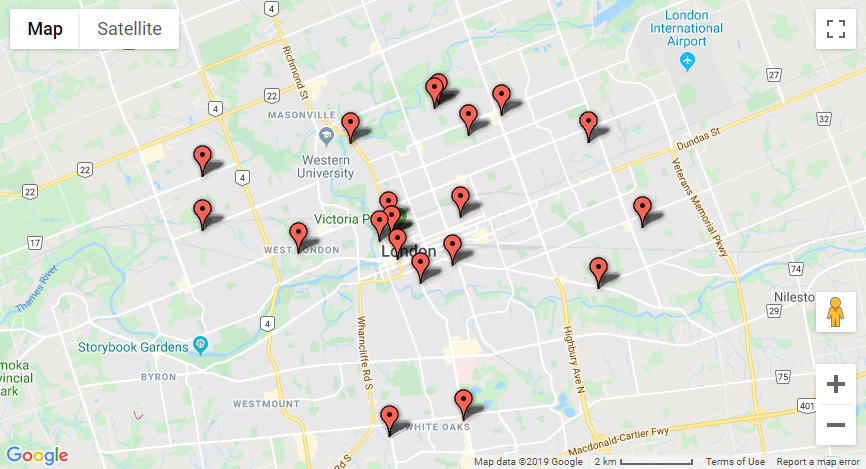 Canadian firearms incidents can have many different results, not just homicides. For instance, not all shooting incidents mapped above resulted in death or were intended. Some people were injured in a public crossfire, a couple of people escaped random shootings, and a few incidents involved a robbery. Though, not added to our map, even an online threat of gun violence is taken seriously enough for London Police to take action.