As Ontario’s capital, Ottawa is known for many things such as the Rideau Canal, Parliament Hill and the Royal Canadian Mint. However, one thing it probably is not widely known for is its high gun violence rate. Ottawa has previously been seen as a safe city in Ontario, yet ironically, Ottawa’s number of shooting incidents in 2016 has reached an all time high from previous years as reported in many Ottawa news.

Thus far, there have been 51 shootings as of September, keeping the Ottawa Police busy. To keep from being overwhelmed with the latest spike in gun violence, the Guns and Gangs Unit was created. The unit is a specialized task force in charge of investigating shooting incidents and assisting the crimes unit when any shooting becomes a homicide. As a testament to the growing gun violence in Ottawa, the number of officers on the guns and gangs unit staff has increased with 25 officers hired for 2016 and intend on hiring 25 more for 2017.

Shooting Incidents Mapped Out By Year

The added staff members can expect to have a number of cases to work on. Since 2010, the number of shooting incidents have more than doubled:

As you can see, 2014 saw a drastic rise in shootings at 49 incidents in total, which included the shooting in front of the National War Memorial and Parliament Hill which claimed the life of Cpl. Nathan Cirillo and injured three other people. 2014 was the highest rate on record until this year.

Mapping Out Gun Violence in Ottawa

Though 2015 saw 3 less shootings than 2014, the intensity of shooting incidents was incomparable with a total of 11 shootings in November of 2015 alone. 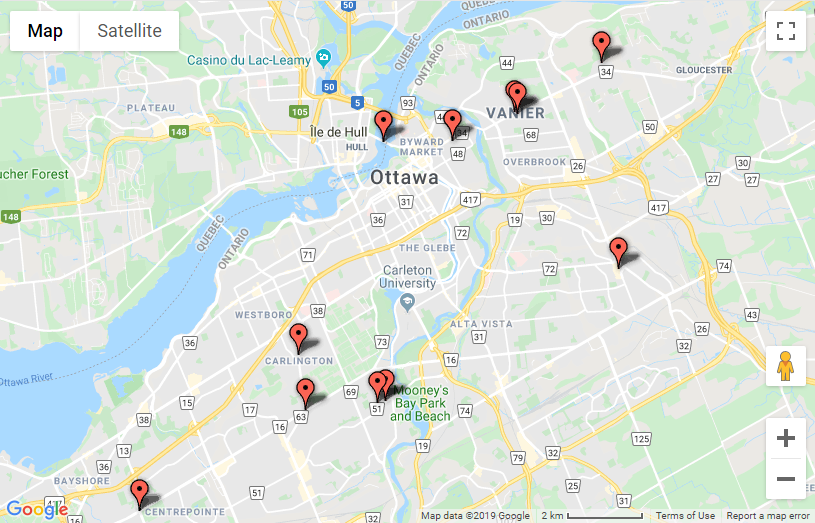 From the visualization above, you can see that November’s shooting incidents in 2015 were well spread out across the city with a few events that stood out:

The next year wasn’t any better for Ottawa with prolific shootings in 2016. These were incidents that resulted in injuries or were due to reports of shootings in residential areas, vehicles, and at locations with no specific targets. From 3 drive-by shootings in 13 hours to 2 shootings occurring in the same night two times in a single year, the gun violence in Ottawa has increased at an alarming rate.

The number of homicides due to gun related incidents in 2016 was equally alarming. Below, you can see a geographical overview of where homicides were the most prevalent. 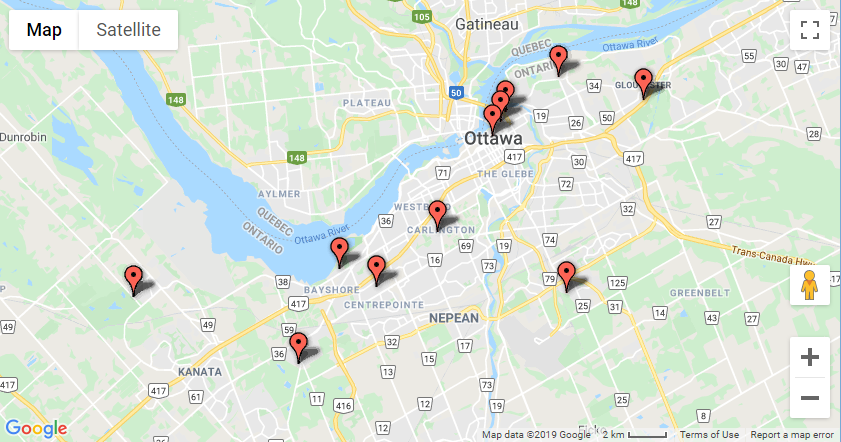 The homicides in 2016 covered a wide range of incidents, proving that gun related deaths come in all forms. For example, one death was a suicide committed by an RCMP officer in a public location, another involved an ex-boyfriend who shot and murdered his ex-girlfriend and two cousins were caught in a shooting that was aimed at another target, resulting in one victim dying on the scene. Thus, while gun violence in Ottawa continues to rise, hopefully, the growing Guns and Gangs Unit can help deter and even lower the number in 2017.

If you’ve been involved or accused of a gun-related incident, call OMQ Law for a free consultation on what your next legal step should be.